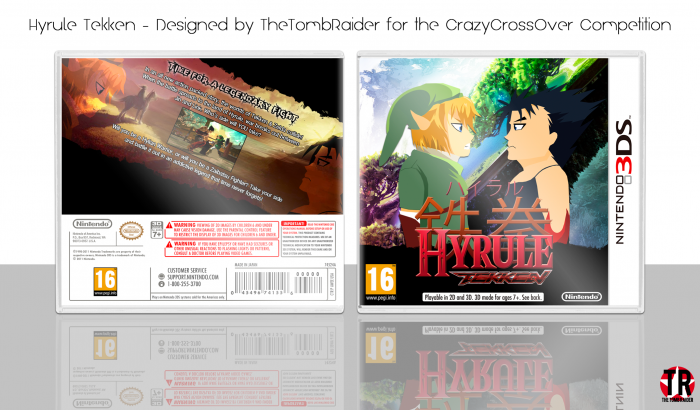 Hey
Here's my entry for the Crazy Crossover competition.
I won't be offended if you don't like it, because I don't think I'm a fan of it either...
I think it's the fact that there is so much negative space on the back, in the black areas.

So, the 2 series that I got were Tekken and Zelda.

Jin and Link pencil-drawn by me, then scanned, then coloured and fixed in Photoshop.
Thanks for looking, good luck to the other entries!

Yeah, it does seem a tad empty on the black parts, and I don't really feel like everything should be tilted there, since there isn't anything tilted on the front. It's not your best job, but it isn't bad either.

I went the tilted look just to do something a bit different.
But yeah, I see what you mean. I didn't expect this to be one of my best anyway.

I liked the drawing it's really cool. The back is so-so but overall its great

This comp really was worth it!

I'm torn; I actually really love the back, even the black parts, the negative space adds something to the atmosphere imo. The colors and the composition are appealing as well. All in all, I really like the back. The front however doesn't work for me. I'd have loved if you'd have used more homogenous colors for a great overall look - also, the presentation seems a bit unfitting to me, there's a lot of contradicting colors that are unappealing imo. You can do a lot better, I've seen you handle colors in a creative way, but this one isn't. Sorry.

I've updated the cover already, although I can't see it yet, dunno about anyone else.

I've changed the presentation, and also had a play around with some other stuff. Unfortunately, I haven't come up with anything to fill the black areas on the back, however, I've made the front a little brighter and more colourful. Hope it looks better now (when you can see the update that is).

I've seen the update, it's visible in full view and it's a vast improvement.

@aldimon Great, glad you like it!
I still can't see it, not even in full :/

The artwork is good and all, but I think I would have rather you used official artwork from both series. Tekken has a very serious feel and distinct style of fighters that I don't find captured with this art. It's just not something I prefer.

Thanks for the feedback, GRP!
Yeah, I know what you mean about Tekken having a serious feel, but I don't think Zelda has that same feel, at least not as much. That's why I went for this style of art.

I honesty think this would have worked better if it wasn't hand drawn, although I can see the effort, I'm not a fan of the way the characters look because to me they look like south park characters.

It's clearly a very well put together box, but like you said, the negative space is a little heavy. Also I'm not too sure about the mass of black beneath the logo. Was that just to make the official stuff easier to see or something? Regardless, I'm sure your reasoning is more valid than my perception, but I just thought it was worth pointing out. The reuse of the same art on the back as is present on the front is a little off-putting too. I'm taking no issue with the art itself by the way, it's a good way to mix two franchises that are visually very different.

Working within the time constraints of a competition is difficult, so the somewhat barren look and re-use of assets on the back is understandable. More than anything it would have been great to see the background images on the front carry over the style of the images you drew. The styles clash a bit, you know?

Thank you!
Yes j agree with what you're saying.

I'll admit. That screenshot on the back (no joke) looks badass. I actually fooled me for half a second.

Haha, glad you liked that ;)

How come you don't just call it "ZEKKEN" lol

Because that sound weird, haha