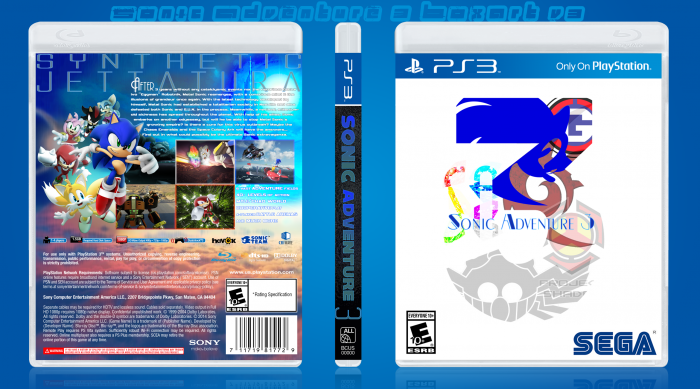 Here is my very first boxart made way back in 2013, as I decided to join in on the Sonic Adventure 3 bandwagon. As you can see from the front cover, this boxart is kinda like a comical/unrealistic 'what if?' scenario where Sega gave the Sonic series a break after the big flop of a game back in 2006 and decided to take their time on developing the definite Sonic experience. My favorite part of the boxart was creating the fake screenshots you see on the back.
Special thanks to beardedwalrus for his PS3 cover template!
And special thanks also goes to Bastart/eat nade/Scorpion Soldier for the PS3 plastic case template!
All characters are owned by Sega.

Nice Cover...
u should try to make a Presentation for it...(:
Try to use this link or this link

Hey, thanks! And I appreciate the help!

Its not bad for your first cover. However I agree with Jr and Iman.

Next on the front I think the "3" is too far on the left. It should be centered. Finally I dont think all the writing about the game is necessary on the front. If you want to keep it, I would recomend making more speace on the back and put it there.

Thank you very much Vince for the comments. For some reason I always thought the '3' was in the center, haha. As for all the game info I agree with you, I was beginning to think that the back might need some game info there other than just the summary of the story.

@VidGmr1996 Only just noticed you updated this, looks much better. I think the 3 on front cover would also look better if the black text wasnt next to it.

As for the back, i quite like it. But if you were to edit this. I would say you could move everything on the back up and that might leave some room below Sonic and the screenshots to just have a some game info...

@Vince_1990 Hey Vince. Thanks for your feedback. I might change the black text on the front to grey. Also, that's sounds like a good idea for the back cover, because now that I look at it, the game info to the right of the screenshots aren't that noticeable.

@VidGmr1996 Personally I would get rid of that black text on the front altogether.... Yea, you are right because I didnt notice it. if you put that under the screenshots with some more space around it. It would look very nice.

@Vince_1990 I agree with you on the front cover, although I originally had all that black text around the '3' for a bit of humor to show that this boxart is promoting the 'perfect Sonic game ever.' Then again the front cover feels much less crowded without the text at all. Also I made the back cover a bit more organized.