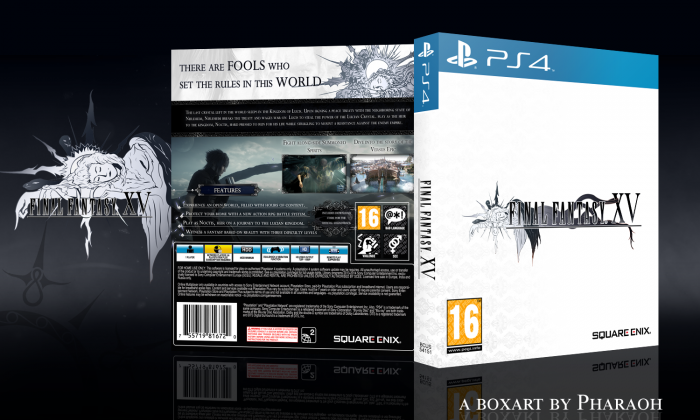 So here is my Final Fantasy XV box. I didnt see myself making this until closer to the release date. But since the Jump Festa Trailer I couldn't help myself. So since I love Yoshitaka Amano's artwork so much, I decided to re-design the logo more in his style if that's possible and what you see on the front of the box is the result of days of work. The logo also resembles the FFX-2 style of sizing because I really Like that style. Especially when it makes it easy to thread parts of the artwork through the logo such as threasding her dress through the X. If anyone wants to check out the WIP and see the artwork in full for, it's here: link

This box was cool to make. It was a bit fussy as I tried to go with the design to the one on the left of this box, but I was strongly discouraged from doing that in the WIP forums and now I see what they were talking about. Thanks for all the help guys.

The pattern you can see all over the box was passed onto me from Agent Lampshade. Everything else is 100 percent crafted from scratch or ripped off of the official website. The official artwork seen on the back is a re-vectored version of the original. it was vectored by someon called eldi13-d4dumez. I think.

You always nail the Amano aesthetic, it's fantastic.
Great job! :)

Thanks man. I don't think my work can hold a candle to his, but thanks anyway!

This is fucking awesome, as all your box from square enix games, well done!

Beautiful. without words. definitely a great game and look forward. I really like the cover, looks so original. Good work bro ;)