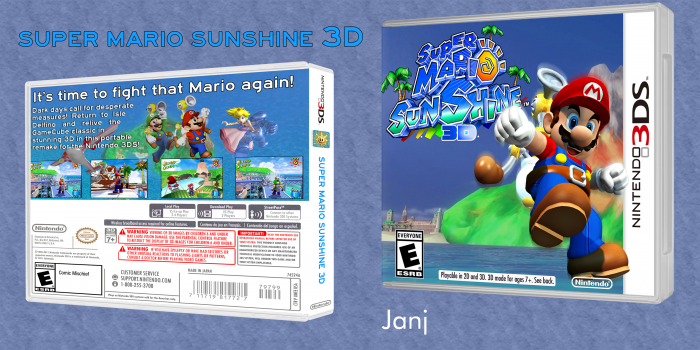 I originally made this for the Wii U (as "HD" instead of "3D"), with some help on the forums (that made it into this box), but it was too plain and people stopped responding so I just decided to redo it for the 3DS.
I did this for the only reason I make boxes, I was bored. I'm actually surprised Nintendo hasn't put Sunshine on the 3DS yet, as they did that to 64, but this time they got off to a good start with 3D Land so I guess that's the reason. And as much as I'd like to see a Sunshine sequel/remake/sequel plz, it'll probably be for the Wii U.
Template is by EdwardPines, with the plastic by Martiniii332. Everything else is from MarioWiki, except for the logo (beta logo + "3D" text), icon, and Luigi/FLUDD render.

I'd be grateful if someone could comment telling me how to improve :3