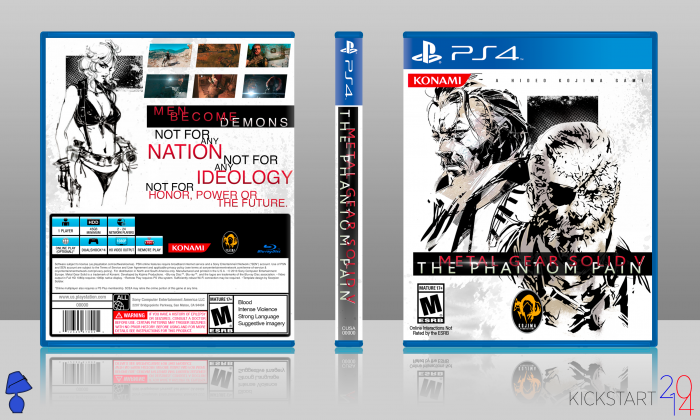 My box for Kickstart '14. For those who've been following me for some time, you'll know I've been wanting to make a Yoji-Shinkawa-esque box for a while now. Well, after my last box (see that little square up there) I felt ready to tackle it.

The Ocelot and Quiet there is official art, it took hours to find them. The Big Boss was much smaller so I had to upscale it a lot and "remaster" it. Shading (on BB) was my own work, and it looks badass without the line-art.

Special thanks to Scorpion Soldier for the PS4 template and Eggboy for the plastic. That's Joeseye's logo too, so major props to him for remaking it/rendering it.

Love the front, not such a fan of the back though. Overall, it's a good box.

The same, you should add dark elements on the back. Otherwise it looks great.

I plan on touching up the back when more plot details and more Shinkawa art becomes available. Focus on the front for now.

Waiting for the master to come back...

can you put this template on resources please

It's Scorpion Soldiers, and the PSD file is already there. The plastic is Eggboy's. I can't in good consciousness rip them off and put it up myself.