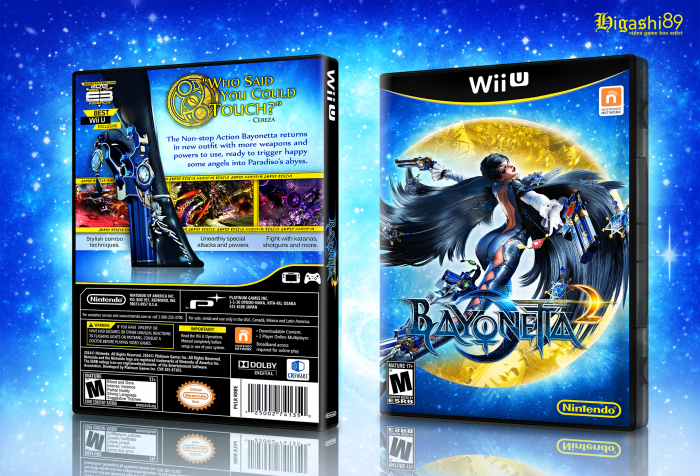 I was doing this box since last month but the lack of resources and inspiration got me again. After some time without touching the files, I was able to recover my creativity and finish this box. Bayonetta 2 is (happy for some and unfortunate for others) a exclusive title for the Wii U, a sequel to the Xbox 360 & PS3 game. Thanks to Nintendo funding the game's development, it can be finished and it's launch date is only confirmed to be released sometime in 2014.

I made several versions of this box, all of them with a different back cover, but in the end, I choosed to do this one since it was the only one I managed to finish, in a way that doesn't look a total disgrace! Bayonetta 2's main colors are dark blue and yellow, so I implement these colors in my box, and the black colors suits really well the game's atmosphere, since it's a action, mature game.

I want to give thanks to the respective people
â€¢ YoshiStar for the awesome Wii U template. I was able to change the temp's colors to black and yellow.
â€¢ Guilty Spark for the PlayStation 4's 3D template. I redimensioned it so it can correspond the Wii U cover's properties.
â€¢ Ynguer from DeviantArt for making Bayonetta's Watch Inscription: link
â€¢ Everyone else on VGBoxArt.com for giving me the inspiration I nedded! And this topic: link

All of them helped me while I was doing this box. Thank you all! :)

Everything else (logos, renders, brushes) I took from a lot of other sites to free use. If someone wants the materials I have related to this box, just send me a PM and let me know!

Check out this featured poster at PosterMason: link

Holy crap this is beautiful

Fantastic. Hate the short hair of Bayonetta, though. Also hate that it's gonna release on WiiU XD

That's it! :D
Higashi89, you give me inspiration! Thank you!
and nice job on this box ;)

This looks fantastic. Love the that you threw her heel in there on the back.

Thank you everyone! :D

Congrats man , sorry for commenting this too late , coz of banning , this is so great , :")

@amia I sent you an email

Stars are back in season hehe

im putting this right here on my fridge