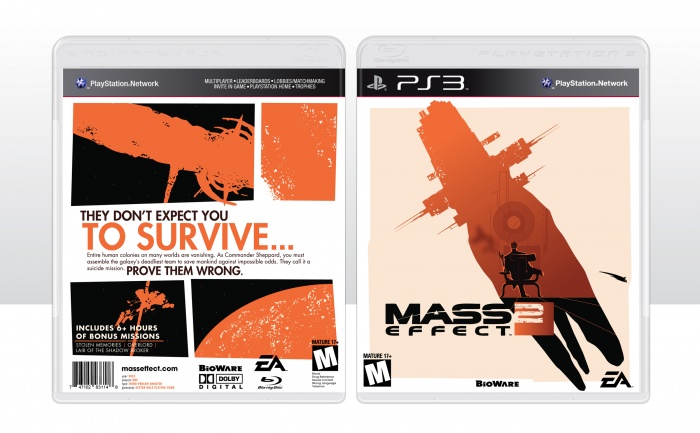 First off, I'm sorry it took almost a year to upload another design everyone. I've been rather busy lately.

Okay, anyway, with this design I wanted to give a strong sci-fi look as well as use techniques I've learned while admiring Olly Moss' work such as the image within an image and his layout design with Resistance 3.

I chose orange as a dominant color because it reminds of the omni-tool in the game and plus I think, it alongside with the peach, gives this an older sci-fi movie poster look.

I tried to have this box to be character focused like how the game is, but I felt that didn't work out well because of the vast amount of characters that would have to be displayed so I instead chose to use, what I believe, were some of the most powerful scenes from the game as a selling point.

Overall, I'm very happy with this design and I'm eager to receive feedback.

The only thing is, I don't like how the EA and ESRB overlap the bottom right picture on the back.

I could see the EA logo being reduced and still working, however, I'm not sure about the ESRB. I'll look into it.

Move all of the legal logos to the left, and move the ESRB square down next to the reasons why it's rated M.

@Ergo Thanks for the suggestions. I'll give them a shot.

Nice job. You are one of the most promising artists of this time.

Thank you for the compliment.

Nice...Good to see you again around here...!

Nice to see your posting a box again. I really like your style ;)

Thanks. Glad to be doing this again.

This is nice work

I'm glad it finally made it in, congrats ;)