Music » Queens of the Stone Age: The Very Best Of Cover ← → 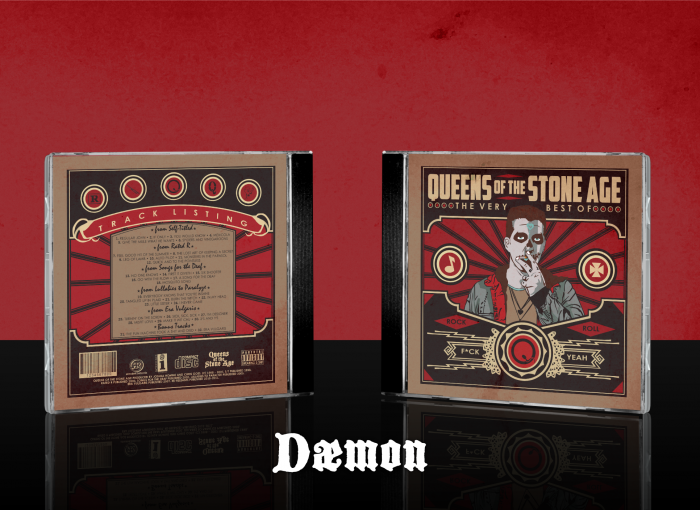 This is my tribute to what is possibly my favorite band ever. The basic design is a vector render of frontman Joshua Homme, which I traced and added customizations to, and a full custom background based upon one of the band's tour posters.

Since a Greatest Hits album is yet to exist for the band, I simply chose my favorite songs and compiled them into a super album. For those too lazy to examine the back in full view, the tracks are as follows:

From S/T: Regular John, If Only, You Would Know, Mexicola, Give The Mule What He Wants, and Spiders and Vinegaroons.
From Rated R: Feel Good Hit Of The Summer, The Lost Art Of Keeping A Secret, Leg Of Lamb, Auto Pilot, Monsters In The Parasol, and Quick And To The Pointless.
From Songs for the Deaf: No One Knows, First It Giveth, Six Shooter, Go With the Flow, A SOng For The Deaf, and Mosquito Song.
From Lullabies to Paralyze: Everybody Knows That You're Insane, Tangled Up In Plaid, Burn The Witch, In My Head, Little Sister, and I Never Came.
From Era Vulgaris: Turnin' On The Screw, Sick, Sick, Sick, I'm Designer, Misfit Love, Make It Wit Chu, and 3's and 7's.
Bonus tracks: The Fun Machine Took A Shit And Died and Era Vulgaris.

I hope you enjoy this, a lot of work was put into it. (Total time was roughly 16 hours.) Template is a modified version of a jewel case I found on google and 0utcast's 3-D template.

Queens of the Stone Age: The Very Best Of Cover Comments

Comment on Daemon's Queens of the Stone Age: The Very Best Of Cover.

Really nice vector work! I like the fact that your art style of your previous game box, continues onto this music box.

Nice Job (Although Songs for the Deaf needs MOAR God is in the Radio and Another Love Song...)!

That template is really good. The box is great. Nice job.