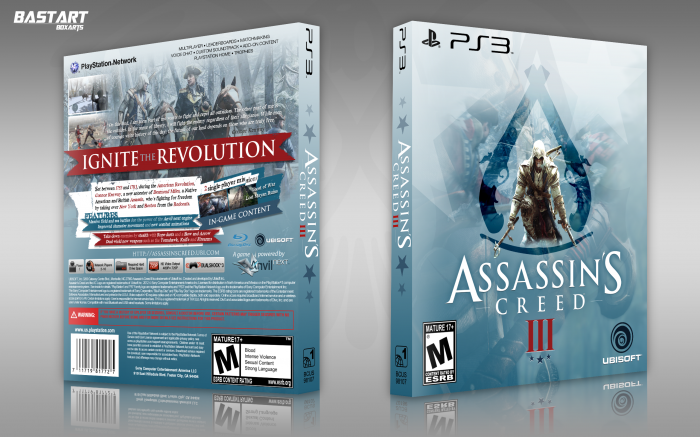 I thought I'd try a different take on the AC logo, by replacing the symbol elements with some flints and a bow, but still looking like it represents the famous and rather familliar AC logo of the series. I've also included a quote from 'Connor' onto the back and added two extra missions as a DLC bonus.

Credits to Scorpion Soldier for the template

This is sick bro! I like that you have tried to make it different from the other AC3 boxes. Its very creative.

And that back is really nice.

Fore me, the back is a bit text heavy. The front is really cool, I like the Ubisoft logo and still, the back is great. All in all very creative. *fav* :)

This is amazing, awesome job!

Could have sworn I commented earlier... well anyway, its looking great man. The grungy feel and font choice correlate well.

You did it again, Very nice job :)

Thanks Mb, appreciate it ;)

it's official, this is the most beautiful cover of Assassin's Creed 3 I've seen all over the internet, AMAZING, give us the printable version!

Thanks, but there must be better ones on here (or yet to come)

I really like the front, but the back too busy for me.

I wish I could make box art as u do man, clean, outstanding!

Congratulations on this work. The american flag colors did a great job into this composition.