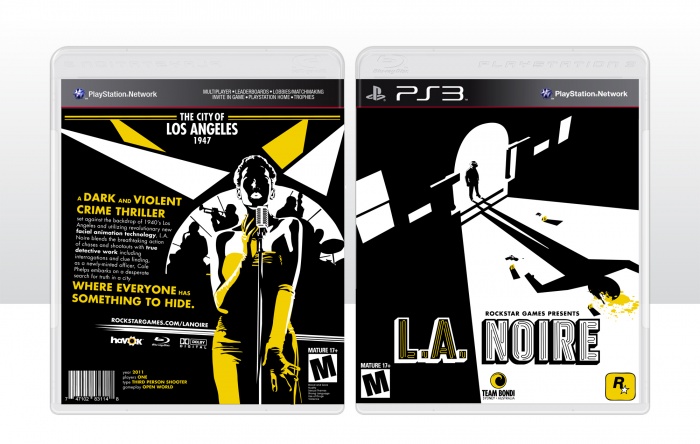 For this design, I really wanted to focus on a film noir design while using Rockstar's colors. It seemed appropriate since that was part of the game's inspiration. For the front, it based off an image from the game of Cole standing outside the Central Police Station with his shadow stretch ing outside of the image. I created a slight twist to the image by making it look more film noir, but making the person now an unknown figure with his shadow creating a crime scene.

For the back of the box, I wanted to also show the liveness of LA back in the 1940s through the performance of a singer on stage with a band in the background. And the way I setup up the type to the left can be read two ways; as one entire paragraph or as "a dark and violent crime thriller where everyone has something to hide."

Seems like there's a little too much empty space on the back, but this looks good otherwise.

Do you have any suggestions on how to approach that problem?

@Ayden some curtains, smoke or light beams? just like it appears on the wallpaper, but than in the same style of your box, off course ;) b.t.w. Are the images vectorized or did you use some kind of filter to gain the effect?

@Bastart They are vector. Also, some interesting ideas. I'm gonna try and apply those.

The front is very good! The back is a bit empty on the top, maybe you can move the singer and texts to fill that space.

Nice new approach and I can agree with the rest of the posters. Front is great, new, back a bit emty but stil very good.

Reminds me of the graphic novel 'Sin City'. But as others have said, the back is a tad empty.

I thought that it looked liked Sin City as well, but I also felt that this was an appropriate look for the game considering its background.

The use of yellow here is unique, and it really benefits the design as a whole in a way simply using red wouldn't have been able to. Empty space aside, I like this.

Thanks, I agree that red would not have worked as well plus with the bonus of using yellow, it kinda reminded me of "DO NOT CROSS" crime scene tape police use because of the same colors.

I listened to all of your suggestions and I believe I have come to a verdict that works for this design. I went with abstract stage lights considering that the woman is only visible due to the light reflecting off of her. Amongst that change, I made some minor alterations by my own choice for colors used at the top on the back as well as fixing the drummer's cymbal and the website.

Wow, great job! I don't think the back looks empty though - rather the blocks of color forming the spot lights pulls the eye away from the text. Maybe break those up a bit more somehow? Overall, this is good work - I really, really like this style.

Oops, I'm looking at an updated version - just realized the "empty background" was a previous version.

Could you make a printable version? I would love to have this on my shelf