[ Buy Batman Beyond at Amazon 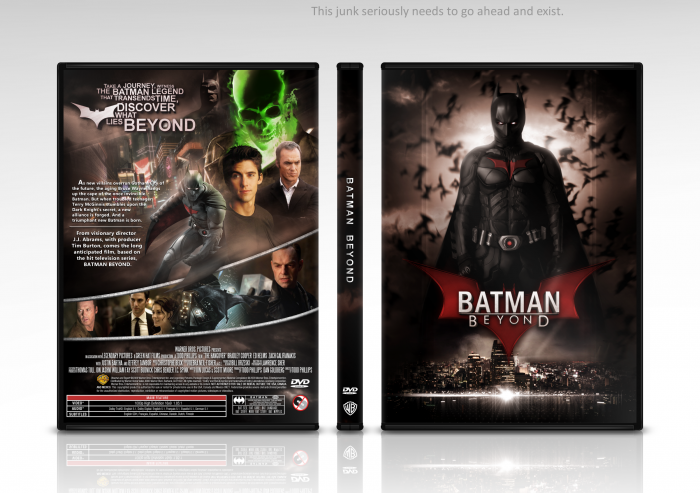 I have been an advocate for this movie for years and years. I hope one day it will exist..
Perhaps if the demand is high enough, it just might.

Thanks for the help you all gave in the wip thread, It helped a good bit!

The talent you possess drives me batty, because this is awesome.

You're too kind, sir.

I'm not a complete fan of the back, but I love that front. Colors are also very neat.

Especially due to you using Michael Keaton as Bruce Wayne. Nostaglia~

The problem I have with this is that it just looks TOO much like Nolan's, series, and not enough like Tim Burton's. Ignoring which series it's supposed to belong to though, it's put together very nice.

Looks great.
Only nitpick is that the credits on the back are for The Hangover.

I forgot to mention that. At the time I started this I didn't give a fuck (If you look at TDKR you'll see I did change it there)
I guess I really should have taken the time to fix those s:

It's not really a gamebreaker, but I do wish you'd included the cast somewhere. I'd be interested to see who'd play who.

I didn't think of many other characters. tbh

The back is beyond awesome.

You people are fucking fantastic, do you realize this?
Cheers!

I Never had the change to favour it, that's how fast HOF's happen these days ;)

Anyway, this is totally BAT-ASS! especially the colour scheme all around and flawless positioning of the renders at the back.

One minor thing I've noticed, is that Batman also appears in the right top corner on the back, I don't think it's really necesarry to have him on there twice in a row, just my opinion.

The top one is the old Batman, Bruce Wayne from back in the day.
I figured it would do well to show the contrast between the 2. I guess it didn't contrast enough. :P

Sweet Jesus this is nice.

I must have a Printable.

Yeah, I agree. I wanted to use a shot of Smith from the Matrix where he is interrogating Morpheus, and has no glasses, but I couldn't find it. \: I guess I could have ripped it from the dvd.. oops. :P