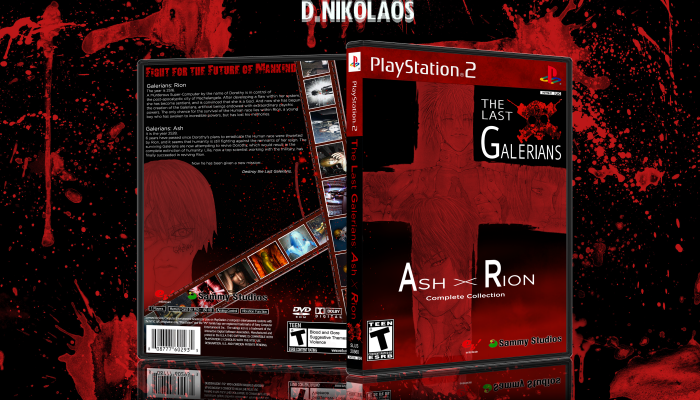 I got the Idea because I'm getting a physical copy of Galerians: Rion soon, and I found that there was once a bundle of these two in Japan at one time.

I initially wanted to make the entire thing from scratch but I found a stock image of the "Last Galerians" Version or the Cover and decided to work from there. I rendered the image of Rion on the back, made the PS2 header, and all of the dev logos on this box. With the exception of the general PS2 information on the rear of the box, that was copied from qwerty334's PS2 Template. link

I have to give mondo props to Deathmania.
He helped me a lot through my WIP thread, and honestly this wouldn't have turned out as awesomely as it did without his help & advice.

Alright this is the completed version of my "The Last Galerians: Ash X Rion" boxart.
I'll be uploading whenever I get the chance to, but it might be a while since my computer isn't running as well as it used too, and I'm in the middle of rebuilding it aswell.

Anyways I hope that you all like how it turned out!

Amazing, but the spine contrasts from the actual box. And I am gad I could help in the WIP.

Well I can work on the spine a bit, and I was actually thinking of that while finishing it up, if you've got any suggestions I'm all ears.
----
And thanks to everyone who fav'd; because in a single day I jumped from rank 2 to rank 4! XD

@D_Nikolaos If you can simply change the background of the spine to black and make the text red, the spine will flow with the box.

@Deathmania
Oh yeah that wont be an issue, I'll get on that as soon as I can, but if I'm going to change the spines' color scheme I'm going to replace the image along with it.
And thanks again for all your help on this!

Alright everyone I updated the printable version of this, although much like my Phantasy Star Universe Box, it wasn't made originally to be printable size, so sorry for a little lost quality.

Although after printing you shouldn't notice it too much.