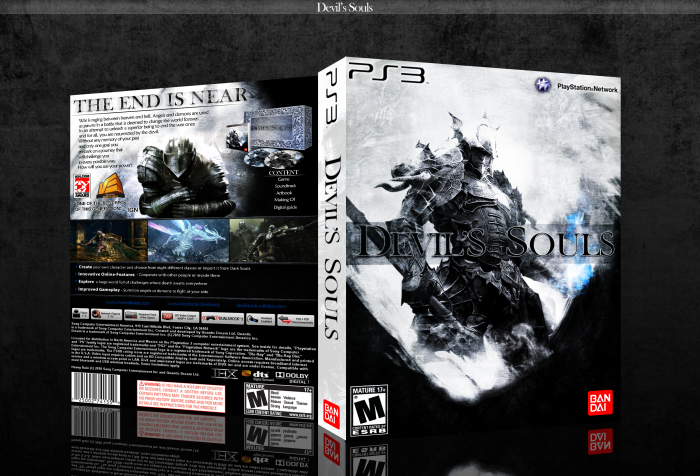 I loved Demon's Souls and I really really liked Dark Souls.
And since From Software already announced that Dark Souls was not the last game in the series, I thought it would be nice to make a box for that new game.

The problem is that there are very few resources of the first to "D Souls" games that have not been used yet.
So finding a suitable render wasn't easy.

I went for an official look (as always).

I like everything but the presentation. The cover is hard to appreciate on a white background, and perspective is off. The front and back are slanted in too much.

Give me the printable so I can show you what I'm talking about.

Thanks for the feedback! Updating right now!

But Ban-Dai? Did they have anything to do with the first two games? It should have been an Atlas or From Software logo.

@Daemon It was Bandai who published Dark Souls, so I guess they'd do the same for the sequels (since it's not PS3 exclusive anymore).

Every things it's great, Only presentation need some work, Good job!

Sorry I missed this, it's freaking awesome.

No need to apologize for that! There are so many other boxes on this site that should also get way more attention.
I am glad you liked this one, though.

Not going to lie awesome box. Love the title Devil's Soul so simple yet effective wish the real game was not called Dark Souls II so boring in comparison.