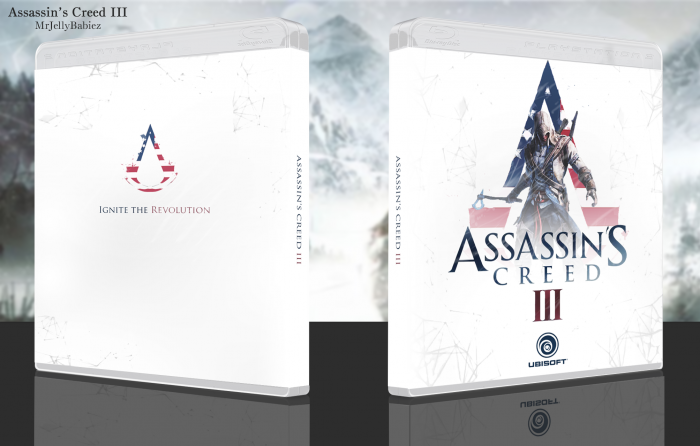 Several designs this went through, and yet the final one was the only design that was not one of my original plans. Still, it caim out quite nicely for something I just wanted to knock up. I was aiming for a sleek, simple slip cover look- I think it worked. Let me know what you think. Thanks. :)

UPDATE: Updated it a bit. Tried to clear up a few things, and made some modifications based on some comments. Hope you like it :). Thanks again for the great comments aswell guys, really means alot after being gone for so long! :D

I say get rid of the PS3 and PSN logo on the front, otherwise really nice work. Also liking the treatment of the assassin's emblem.

I like the front, the back is too empty but nice :)

For some reason I thought this was ColonCatastrophe's work. It looks very similar. That's no bad thing I assure you.

Haha, I appreciate that I'm on your mind. But, seriously, this is damn great stuff JellBabe. I don't mind how simple and to the point the back is, and the front is... Yes.

I would have preferred to see the Assassin's emblem not cut off at the tip, but this is an otherwise well planned out and executed design.

Thanks for the feedback guys, it's all been very useful. Glad I'm back in one of the nicer regions of Internet communities again :D

Very simple, but it really works well in this case. Nice first!

I would feel bad if I didn't tell you that this isn't my first... :L Thanks anyway!

The front is top-notch, but I feel like the back is too empty.

I love how simple this is yet it kicks all kinds of ass! I hope the actual cover is something like this. I would buy it instantly!

Please make a printable man, I love it. It's so clean and needs no explanation

Out of all current AC3 Covers out right now, this is still by far my favorite.... I'm really in fight with myself about either adding the GW on the horse on the back or keeping it the same. Either would be awesome.

Please make a printable version, this is incredible!