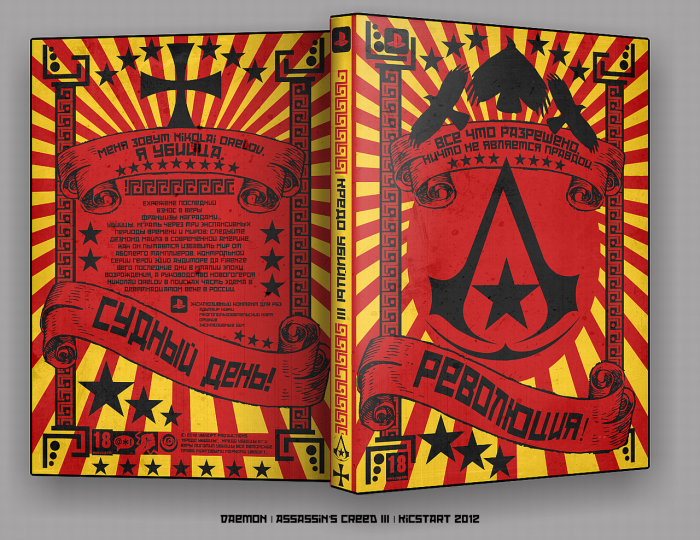 This is my spin on a Russian edition of Assassin's Creed III. I'm taking some liberties with the story, and this box is if the main protagonists of ACIII are Desmond and Nikolai Orelov, the protagonist from The Fall comic series, who lives in nineteenth century Russia.
Everything is legitimately Russian. I'm not posting translations because there's so much text. If you really want to know, message me. Also it is completely custom art. Loosely based on Russian war propaganda.
Thanks to slimd1995 who critiqued it for me through Steam chat.

Impressive work. I'm not particularly fond of the sunburst, but the combination of Russian-style imagery and that of the Assassin's Creed games is admirable. Nice work, Daemon.

I appreciate it, man!

The colors work well together, the layout is top notch, and it overall just looks really nice. I really love the influx of non-traditional boxes.

Favorited in a heartbeat.

"Everithing is permitted, Nothing is true" must be on there somewhere I've cheated and translated the the thing you've posted at the forum :P so I knew it was an Assassin's Creed box, but didn't expected it to be complete in russian O_O Anyway, I love it :) those colors reminds a bit of a circus but i.d.c., it's still very creative.

The tag is kickstart2012

Looks like something out of The Fall. Well done.

You've created a very clever boxart here Daemon. It's bold, it's daring, and the colours are awesome.
Nice work!

Very nice job. I wouldn't expect a strong yellow color in an AC design, but it looks great.

I love it, but the wavy text on the bottom of both the front and back don't wave with the flag.

The colors are a little way too vibrant, but this is still an excellent design.

I've heard ACIII is supposed to be set in the American revolutionary war?

There's too many rumors about ACIII for me to be certain. I'd wager it'll be primarily about Desmond in modern day though. Anyways, this box is just a version of the game I'd like to play.

It's a sound idea.

Beautiful. The idea is executed perfectly.

Congratulations on the Hall of Fame.

Nice job, it was a worthy entry.

Wow very nice indeed! How did you make this? You used shapes or something?

It's all custom art apart from the AC logo and the birds, which are clip art.

@Higashi89 I don't use Photoshop so I'm not sure exactly what the pen tool is or what my program's equivalent of it is.

Amazing. Reminds me of OBEY Propaganda.

You need to teach me how to do this, I must say again, awesome job. One of my favorites on the site.

This is really interesting, it makes me wish AC III was set in Russia.