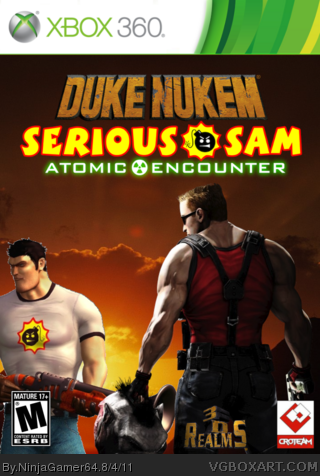 A first person shooter that crosses the Duke Nukem and Serious Sam franchises. After Duke has defeated the Cycloid Emperor and peace has been restored, sinister creatures called Time Bugs have torn holes in the fabric of reality. When Duke fights a horde of them off, a portal sucks Duke in and flings him to Serious Sam's world. At the same time, Sam enters the time lock, only for the Time Bugs to screw up Sam's destination and flings him to Duke's world. In Duke's world Sam must fight both the aliens and the Time Bugs while Duke must fight Mental's forces and the Time Bugs. The gameplay is a mix between the Build Engine and the Serious Engine. The game has the same "killing loads of enemies" feel from Duke Nukem 3D and Serious Sam. Gone are the lack of enemies and sluggish pace of Duke Nukem Forever and back is the fast paced action and army of enemies from yesteryear. The regenerating health bar is replaced by a traditional health bar. You can still boost your health bar up by interacting with objects though. There is no longer a two weapons system so you can keep all the weapons you collect.All of the weapons from all of the Duke and Sam games are here, including a few new ones so it doesn't seem to rehash everything. The weapons from Serious Sam II have been tuned up to seem more powerful. Except to see all of the enemies and bosses from prior games (the Time Bugs being the newest addition). In the Limited Edition version of the game, Caleb from Blood and Lo Wang from Shadow Warrior playable characters. They have their levels, weapons, and enemies from their respective games. The Atomic levels include the levels from the Duke Nukem 3D expansion packs like Duke Caribbean: Life's a Beach, Duke: it out in D.C, and Duke: Nuclear Winter, and levels from Serious Sam: Next encounter.


Description from the back of the box:

Time to kick a**, chew bubble gum, and GET SERIOUS!

Duke Nukem - Macho ladies man with a love for booze and babes.

Now, these two are going to face a threat greater than anything think off the top of your head. Evil creatures known as Time Bugs have ripped holes in the fabric of reality and have caused the worlds to fold into each other. Join Duke and Sam 'Serious' Stone as they lock, load, kick a** and chew bubble...and their seriously all out of gum.

Â• Blow enemies to bits with a huge arsenal of weapons.
Â• Explore your respective universes.
Â• Face off against of all your deadliest foes and some new faces.
Â• Play solo or with a friend in coop mode.

Description from the back of the Limited Edition box:

Who Want Some Death!

Caleb - An undead gun slinger with a vengeance.

Lo Wang - Assassin on a quest to stop evil.

You thought Duke and Sam had it bad, now these are guys mixed into this. Time Bugs are ripping reality like a paper and someone has to stop it. Looks like these guys are up for the job.

#1, Now if only there was somewhere on a box to put all this information...

But seriously, the idea there, just it seems you've not put the effort in to actually making it, other than that two other things stick out to me, how much the title varies, why don't you try making your own?

And secondly I can see a large amount of white around Sam's head. You can use the background eraser tool to get rid of that of it's a render and are two very distinct colours.

You might want to try and make Sam more prominent, maybe have Duke centred and then Sam in front of him - might look interesting.

Alright I'll take your word for it.