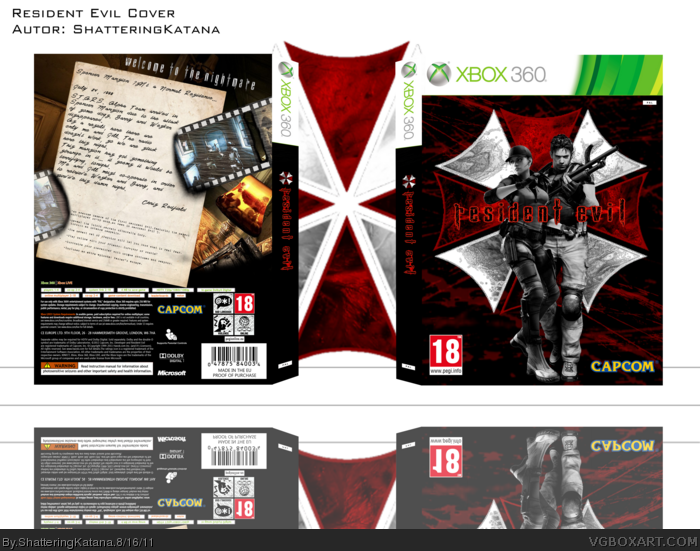 A shame that no one noticed this lovely box art. The front in particular looks as though it could grace the cover of an official release!

A few things could help bring out the shine in this design:
*The back design feels a little...empty, in my opinion. Again, it may just be my own personal preference, but there seems to be an excess of non-aesthetic black space. Maybe you could try a design that spans more of the length of the 360 back template, rather than having it fade out towards where the template starts. The jump between the end of the 'letter', Chris Redfield's signature, and then the bullet points also seems a little bit too spacious. Again, just something to think about!
*The filmstrip screenshots dovetail really well with a Resident Evil box, but don't clip them into individual frames! I know the upper part of your design is tight and there's little space, but when you isolate an individual square of the border like that it really dampens the effect. You could try stringing them along in the space to the left and the upper right of the letter, so it retains the effect of a long filmstrip, just largely obscured by the letter.
*Presentation counts just as much! It's like vinegar: in some cases, it isn't even necessary, but if you do apply it, you need to make sure it's just right, otherwise the whole salad you spent so much effort on becomes unpalatable :). It's good a lot of times to use one big wallpaper image as you did, if that's your style, but the white space above it really shouldn't be there. Also, if you were trying to make the white space below the picture the 'ground' for your box to stand on, adding a reflection would go a long way to help solidify the effect!

This design has a lot going for it, and you even added a printable so that others can display your work! Well done. I hope my suggestions were of some help :)!

Updated box, i like it more than my older sh*tty version.

what a great box, i would suggest to make the RE logo bigger but other than that great box and an outstanding. 9/10 + fav

The back clashes with the front but it's not too bad.

Thanks to everyone who commented/faved.
#6: I personally like the logo in that size. Thanks for the help anyway. ;)

The back is very nice ! the front is good

Thank you! Plese see my other new Resident Evil boxart for gamecube.