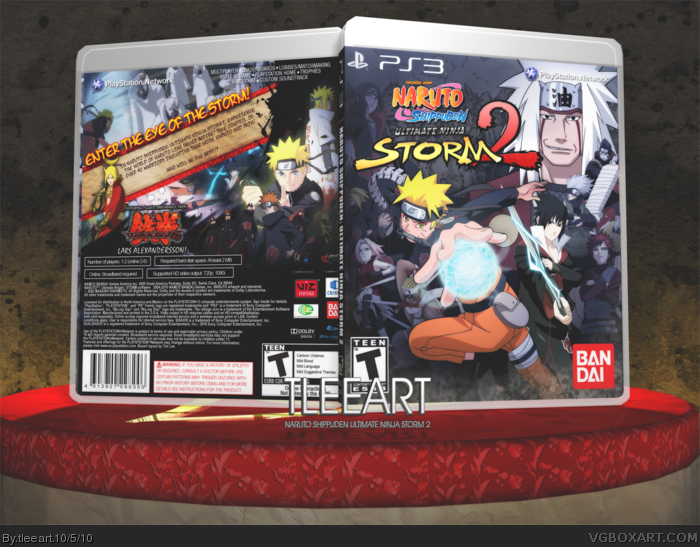 I started work on it a couple of weeks ago, and since then, I've moved into a new house. It took me awhile to get my computer hooked up because I was lazy lol.

Temp by Scorpion Soldier (edited by me)
Sentroavium for being awesome and helping me find good resources
www.saiyanisland.com Saiyan Island for having tons of resources
Photobucket and Naruto official websites for further images

Also, thanks for those who commented in my WIP thread, such as White Dove, Spiderpig24, Sentroavium, and I think even YoshiStar stopped by!

If I didn't mention your name, and you posted in my WIP thread, I didn't exclude you on purpose.

I started this box out way different than it is now, and I'm glad for it. Printable is available.

The composition on the front is damn near perfection, hell it probably IS perfection. Arrangement, subtle colors, lighting on specific characters, everything comes together to make a truly lovely front design.

Back is just as good. Has an official look to it, yet I know the actual official wouldn't look this nice. And I see you even changed the legal text to match the game, something I always look out for.

I usually - unintentionally - nitpick the hell out of designs and try finding things that need to be improved upon, but I have to see I'm not seeing anything needed of correction here. Excellent work!

#2, Honestly, I like it when people nitpick on my work. For example, it was Sentroavium who suggested I did my own legal text. I would have edited it a little anyway, but he suggested I typed it out myself based on an official. I used the first Ultimate Ninja Storm's legal for this, and changed dates where needed.

I'm glad you think highly of this. Hopefully others will, too XP

I won't nitpick unless you ask me to, I like it.

I'm glad I could help you through the process.

Pretty good, i was gonna make a box for this when i got done with the one i started like a month ago XD can't wait for this game. BlazBlue CS was disappointing.

#5, I didn't bother with Continuum Shift, I just bought Calamity Trigger when I could get it for less than $20 lol.

I'm also pretty hyped for this game, but I won't have the money to buy it any time soon :(

#4, You are free to crit my work anytime. You always provide good ideas and input.

I have problems with mostly all covers except for officials, my covers, and a small group of other people, generally problems that no one cares about. This is why my criticism is seen as unimportant, I look at minuscule, otherwise hard to notice problems, that officials covers just don't have. None of what I'm about to say affect the overall quality of the box itself, but are minor touch ups I always do that people always neglect to do.

Often times I don't give criticism to people that I don't think deserve it or respect me, but in your case it's contrary.

-- Some of the images you used on the cover range in quality, (complaining about this is hypocritical), I call this term, "working with what you have", if there's not an image that's higher in quality, that's just what you'll have to work with, and for anyone who says anything about it, tell them to go find the same image that can be used on a 300DPI template, and not some fan made flat template that only requires low-res images, hell, my own covers sacrificed overall quality with a large range of images that are extremely high in quality and extremely low.

-- The back seems to be a bit short on the information side, although the one block of text you have there seems to sum up about just about everything there is that needs to be known about the game itself. There's a bunch of Naruto characters all over the front and back, the average user would assume all you do is "fight n stuff". although myself, my backs are a bit text heavy.

-- I'm not gonna really harp on the MULTILAYER. LEADERBOARDS. etc. section like I usually do, because, there's no way you would know since the official cover hasn't even been created yet. When that happens I use logic, a game like Naruto could possibly have CUSTOM SOUNDTRACK, however, how would Uncharted 2, or God of War III allow custom soundtracks? Something most people don't even think about.

-- I like that you highlighted both Naruto and Sasuke because they are at the moment the most important characters in the series, and how all of the Peins are organized around each other on the back. Good job finding an in game render of Lars Alexnder because I failed to do so. On the presentation it looks like you added a light fog around the entire picture, making it appear more softer. The front takes a more less in your face appeal, with a more subtle less-contrasted navy blue coloring with good lighting on certain characters where need be.

I'm faving this because I took part in developing the cover itself, and my feedback was incorporated into the final design.

Like you said, sometimes it's near impossible to find truly high resolution art for some games, since the full resolution art rarely goes outside the game developers and the artist/s that work on the marketing for the game, especially for anime games for some reason...

That's why I wish to be able to create art that can properly mimic the style of the original art. Unfortunately, I'm not there yet.

Fortunately, there were some really high quality pieces out there, but I did have to settle in some cases. I attempted to clean up what I could.

In regards to things such as the specs (custom soundtrack, leaderboards, etc.) I will try and remember to check that information against the official specs. That sort of thing bothers me to an extent as well. That's why I followed your advice on the legal text and the icons above the ESRB.

I did consider trying some different layouts for the description on the back, but I try to make it simple many times on my boxes. True, an official box would point out a couple more points than I did (and I loved the way you did yours), but my main goal was to focus on making the back layout pleasing to the eye, something, I sometimes fail at.

And on my presentation, I did make the foggy effects and did a light blur to soften my final render. There were certain harsh edges on the presentation I wasn't happy with. I hope it doesn't look too bad.

Such delicious information and theory here. I really appreciate your thoughts on this and design in general.

Thanks again for all your help.

#6, CT is better anyway so you made a good choice XD in CS, everyone is powered up, Jin is neutered, and the online lobby is taken away, its just awful, not to mention the $8 character DLC. F that.

This is quite amazing. I love this so much.

This is really great. The presentation is awesome, and the template looks much better.

#11, Admittedly, I just eyeballed it when I made the case the first time. The second time round, I used Yoshistar's plastic as a reference when modeling the case. I'm glad it's looking more authentic.

Thank you to everybody that has commented and faved so far!

Wow, this is epic! Nice job man!
Do you have a render of Naruto in the front?

#14, Yeah, I rendered it from an official wallpaper and added the Rasengan effect and made him into Sage Mode. I can post it to the Resources section tomorrow. Did you want it with or without the Rasengan and/or the Sage Mode?

Oh, and thanks much for the comment and fav, LK! Again, thanks to all who have commented and faved!

if this doesn't get HOF i will leave the site

The whole box art is awesome. BANDAI should have hired you to do the new game. The only thing that i don't like a bit is the Rasengan because in the real one he is throwing a kunai but never mind.

Best cover of this game I really like this :)