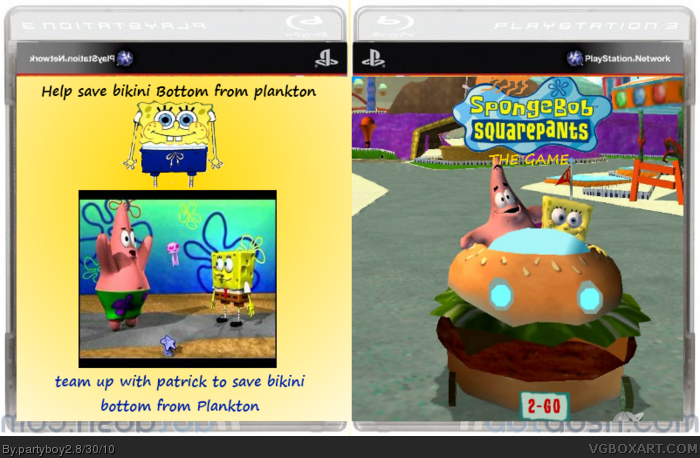 I saw the title and box-knew it was you. I'm not even bothering to post again whats wrong with with the box. So many people have, yet you ignore. Don't post excuses. Because of this and your spam, people hate you. Until you stop, have fun being dissed.

#1, Ego much? crediting yourself for your own box? still bland, not well done and just a few pictures text and 2 renders. the description is too simple and boring, and you should get better fonts. i still hate you, but know you cant say i didn't help. if you dont try to fix these, i will request a ban.

If you're not honestly going to improve, you're going to get banned.

On the back it pretty much says the same thing twice

ok guys I think you are just being negative just to be negative against me... i put a lot of effort into this one and i think I really improved over my past boxes

and gamergizmo whats wrong with crediting myself.

#10, Simply put it does Not look like you put a lot of effort into this box.

Now, on to the 'box'... The fact alone that the template used for the back is just a mirrored version of the template used for the front, just baffles me beyond belief. Of all of the perfectly good, full templates to choose from, you choose to take one that is just a front, and mirror it to make an unrealistic, mediocre back template. I can't really say anything about the design without being too harsh, but why would it be subtitled "The Video Game" if there is already Spongebob games in existence? I know you are probably not even going to read this anyway, and even if you do, I know you won't listen too it, because you've ignored every other piece of advice you've been given in the past, but if you do read this, then please put some effort and care in to designing covers, instead of pasting screenshots, and whatever else you can find that relates to Spongebob under a PS3 template. I have loads more to say, but It's 3:00 AM right now, and I've already wasted enough time writing this as it is.

why oh why do you bother, you must be a 10 year old, Schoolkids can make better boxes than this, honestly I really hope you get banned, it's not worth the effort of clicking on your box, then typing to comment. But to be fair you have improved, you've graduated from - woeful, to sickeningly bad, CONGRATULATIONS. for now on I'm saving my precious time on making boxes not commenting on yours. In short, GTFO, NOWWWWW YOU EGOTISTICAL BIGHEAD WITH NO IDEA WHEN TO STOP AND HIGH OPINION ONE HIMSELF, GOOOOOO AAAAAAWAYYYYYYYYY NOWWWWWWWWW!!!!!!!!!!

I think I put more effort into this (link) than that!!!

Yeah you put alot of effort into this box. This is so bad. Everytime you make a box someone dies!

#16, Nice self advertisement disguised as criticism

I didnt mean to only post credit to myself to make me look cool, I only did it because I saw other people post credits for stuff like logos and templates but I didnt know you can't do it about yourself.