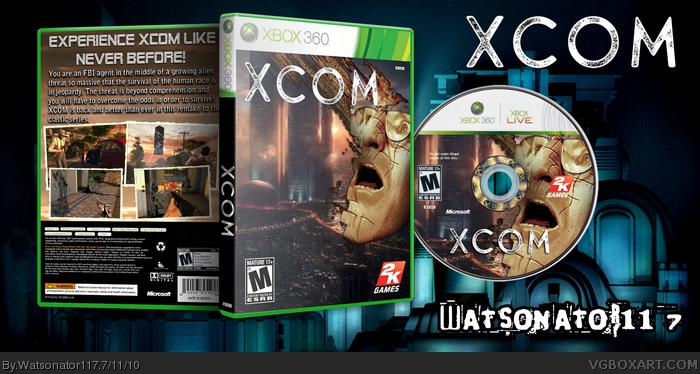 Alright I finally finished my XCOM box and uploaded it!! :) when I posted it in the forums it gained a lot of positive reviews and I truly believe that this is by far my best box art to date! It took me a few days to make because I wanted to give it my all and make this an awesome box art. I also added a printable. Please comment/rate and favs are greatly appreciated :D

You have really improved with this box. Keep up the good work.

i might be missing something but what he heck am i looking at? Like the front is a dudes face with stuff comming off it looking kinda badly rendered. back is two screens on a bg with some text...sorry dude i just dont see whats so great here. Oh and i dont get the all black spine either.


EDIT: sorry i really cant be more helpful idk what the game entirely is. I just am going off what i see. And what i see is a little effort but room to do better

Give credit when you know where you got the image from.

#4 XCOM is a reboot of the franchise and is being made by 2k Marin, the guys who made BioShock 2. For more info, go to this link: link

#5 Thank you Grand. I didn't know the name of the artist who painted it.

#6, It was in the bottom right hand corner of the original image. And I used this cityscape only a few days ago on my Deus Ex box.

I really love the front, the back is kinda plain though. You improved very much though, so youll get a 7.4/10 and a fav.

#9 Thank you :) I'll work on the back more for future versions of this box

Not bad. Quite confusing though.

Yeah, this is your best, but unluckily you advertised it on my page so no fav

#14 Aww, well I deleted the advertisement from your page so can I please get a fav from you? :)

Alright, I updated to v2! :) I added the disc to the side of the box. Thank you for the comments and favs. Enjoy! Credit to Nerdysimmer for the disc template

It's not bad, but everything looks a bit too obviously rendered and outlined.

OK, so here are my suggestions, by request. First of all, I know nothing about this game. Being the boxartist, it is your job to tell me what this game is about, and convince me that I want to play it. You have told me what the game is about, but the box doesn't really go along with what you've said. For instance, you say it's about an alien threat, but I see nothing on the front that would suggest that. You've got the Spider-Man villain Sandman in front of a city background. What does that have to do with alien encounter? Is the guy being "abducted"? Eradicated? Even so, the city background doesn't really show me that it's under heavy siege by extraterrestrials. Look at the District 9 cover. Normal slum, except for the giant freaking mothership over it all. I know instantly from that cover that something is wrong, that there are aliens here. All I can say from this cover is that that dude has issues. Is he turning into sand? Evaporating? Being killed by aliens? Is it just a cool blend effect? I have no idea.

Then we come to the back. Your tagline says "Experience XCOM like never before!" I know nothing about this game, so that tagline tells me that this must be a remake, since you say "Like never before!" If it is a remake, you've told me nothing about how this version is better than the last, and why I would want to play it over my old version. If it isn't a remake, then you need a better tagline, because you're implying that this is a remake, which automatically makes everyone think "Eww, old game, no thanks." Next, we look at your description. You've told me nothing about the gameplay. Is it an RPG? A Shooter? An Adventure game? By your choice of screenshots I can't tell if it's first person or third person perspective game. Your plain white screenshot borders are also random and unappealing design-wise. How does white fit into "alien encounter"? And you've only given us two to look at, one of which doesn't even show gameplay. Bad choices, and you need more screenshots. Plus, look at your background on the back. It's too busy, and you've covered most of it up. Whatever use it had as an image is now gone because we can't tell anything about it. If you have a really great image for the back, don't cover it up. Let us see it. I've done it in the past as well, especially when I first started, so I tell you that from experience learned.

Your presentation is also off. You've placed your box on a huge, complex, busy image, that immediately draws our eyes away from the box. And your box, which should be the focal point of the presentation, is overshadowed by the enormous CD that you made, which doesn't even give us new info... it's the same image that's on the front cover, making the addition of the CD not only useless, but impractical in terms of design.

Overall, you've give me a design for a game about alien abduction, but the only thing that seems to say that is your two-sentence description that tells me nothing about the gameplay. Not trying to discourage you, just giving you the best, honest advice I can in the face of no one else offering you anything to improve on.

That looks really awesome but I agree with #21

#21 Thank you for the advice KoopaDasher :) I really appreciate it! I'll use that advice to edit this box and future boxes and make them better!

Thats Pretty damn good. i think it deserves a FAV.

Hmmm, I don't know about the front, it doesn't look too bad but the back certainly needs work, the screenshots are too big and the text is a bit plain. The BG in the back could have been more creative since It's plain too. But if you've just began making boxes then I think you've done a good job on this one. Just keep trying to look at other boxes and observe how they are done, different styles but there are things that remain the same in all boxes, standard things.
Anyway, all in all it is a good design. :)

#26 Thank you for the advice. I've been here for over a year so I'm not new when it comes to these but I want to start showing my true potential and make excellent boxes.

#27 You're telling me haha but it's really good advice

Alright I updated the box to version3 :) I changed the background on the back and also added two more screenshots and some more text. I also changed the main wallpaper and added the XCOM logo to the whole presentation. I hope you like it!! Enjoy

It is much better now

#30 Thank you :) the background picture on the back is actually a picture of the sunset I saw when I was on vacation in Roswell, New Mexico last summer!