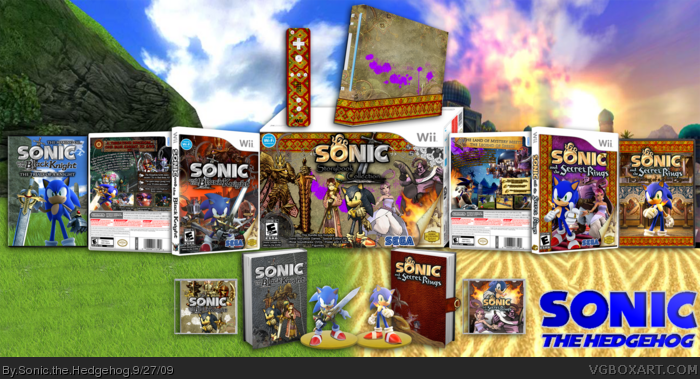 It's finnaly finished! My entry for the GrahamZ Comp! :)
Anyways, as you can see, Alot of effort was put into this! Favs and comments are greatly appreciated!
If you want to look at them individualy, you can find them here: link
Credits : SonicStyle for most of the Images
Jbone (?) For the CD Temp
GrahamZ for the Books
Google for the Wii box
and Lestat for the Figurines
Enjoy! ;)

AWESOME! One problem, a collection with 2 games?

Wow, cool pack for only 2 games that are not even too good, hehe amazing work 5/5 +fav

There is something plaguing VGBA. It's the creation of a "collection" or "special edition console" boxes. I strongly support putting forth effort into side-objects to accompany ones game, such as a figuring or keychain. I think it's a creative way to present the game.

However, I think it's become really lazy. The inclusion of a Wii in most of these is pointless. It takes up room, we know what a Wii looks like, and stamping a texture or the same picture of a character as what's on the cover of the game is a lazy way to add "substance" to your presentation.

The same can be said for including the standard soundtrack, making of, etc. objects. Usually they don't have anything special to offer to the presentation other than "more shit."

If you want to make a nice presentation, add some creative things, but keep it simple. A figuring, toy, object, etc. is a good idea, but ONLY if you're capable of coming up with the appropriate image for it. Yours is pretty decent, but way too often I see people paste a cropped image of the character on top of a badly drawn stand and call it a figurine.

Soundtracks and extra DVD cases can be nice, but usually it's just going to make the image even bigger for no reason other than to add clutter. I've rarely been impressed by a "making of" or "soundtrack" cover accompanying the actual game, and 9/10 times it makes the image so large that you can't see the details of it when it's zoomed out, and when you full-view it, it's so large you can't see anything at the same time.

You'd have been better off being conservative with your extra stuff.

Other than that, I have no complaints, aside from how stupid the purple paint splatter looks. It's out of place and seemingly pointless.

I think its well done. The Purple/Pink splatter brush on the Wii clashes completely though. +Fav

I really don't like the Wii and the Wii Remote, but the effort here is undeniably outstanding. You've used the same renders a few times, but I can easily tell you did your best to make each item unique.

i am so fucked, good luck in round 2
also, is your box for my competition near done?

I agree with Drakxxx that the character models make it repetitive. This is a great effort, and certainly your best.

Well done.
I am mighty impressed by the effort you made to put this together!
FAV!
Author Fav!

#7 totally agreed...i like it, it's really nice and although i agree with TheSlyder's critisism i have to say i can realy see the effort. Good luck in comp! +fav
P.S. Is anyone else going to piont out that the Sonic and the black knight book is the wrong way round?

No cred for my render. I worked hard on it :(

Thanks for all the faves and comments guys! :)
#5, Check out SO's entry ;)
#7, Do you have to complain about everything? -_-
#8, Thanks. The splatter is the Blood of King Aurther's Knights.
#9, Thanks. unfortunately those are the only renders in that style...:/
#10, Yes. My box should be posted by tonight ;)
#14, Oops sorry man! :x
Credit goes to jevangod for the Render.
#16, I just don't see what the big deal is. It's for the GrahamZ comp which requires all these things.

#15, How about acting like a grown up, instead of a spoiled-bitch-child?

I gave you honest critiques, and you have to respond like a crying baby that didn't get the pat on the back he wanted for his finger painting.

#16, Damn, Spoiled-bitch-child. First time I ever heard that.

Can we please get back on Topic?

While the Box(es) are quite nice, I feel almost Suffocated by the amount of stuff. the purple blood splatter thing does look off, and I feel that it could be tweaked a bit. Other than that issue it is a standard bundle box, and is quite nice.

#21, I've already addressed those issues, and he whined about it. I really don't expect you to get much more maturity out of him aside from the fact that you gave him a treat by saying it looks "quite nice."

I'm sure that'll get him to behave. It seems to be all he's interested is, is praise.

You obviously put a HUGE ammount of effort in this, I commend you for that, it IS truly awesome!

Congrats. It seems that every Sonic fan in VGBA came to fav this :p

Awesome. Even if both those games sucked. But man, that is one ugly Wii...

Wait, is that supposed to be a new wii or a skin for a wii?

I really dislike the strange Indian pattern on the box, Wii, and Wiimote. Actually, both the Wii and Wii mote look awful. The characters on the box stand apart in an obvious way. You really should have done something to pull them together and make them look like they're a part of the same scene.

However, everything else is incredible! I really love the effort you put in to this, and those story books look pretty awesome to have the name SONIC on them. Overall, man, you did a pretty great job with this. Congrats on your Hall of Fame.

Wow... I didn't see this coming. Now I've missed both of my 2 boxes get into the HoF... =P
I should finally get around to making some updates... >_>
Thanks for the comments and support.

check out my box artz

Frick yeah, I'd get that in a heartbeat

More by Sonic the Hedgehog 38